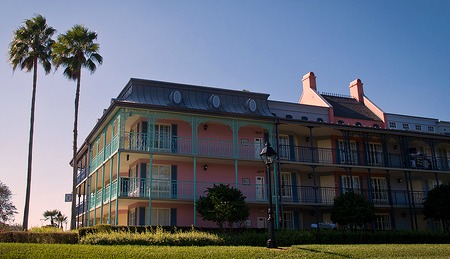 This Disney moderate resort opened in 1991 as the original Port Orleans resort. Cobblestone streets, gas lamps, fountains and beautifully landscaped grounds with trailing bougainvillea, magnolia trees and vines create a romantic atmosphere. As the smallest of the Disney moderate resorts, the hotel is quaint and more intimate than Port Orleans Riverside. As the smaller of the two resorts, the French Quarter has fewer people.The grounds are laid out in a grid making it easy to get around. 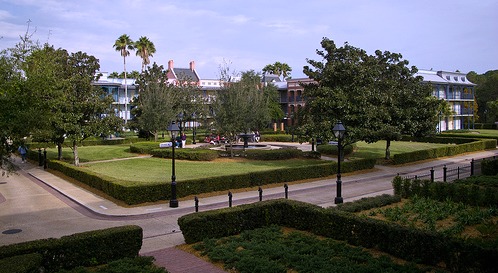 Situated on the tranquil Sassagoula River, the Port Orleans French Quarter has 1008 rooms in seven buildings. The three story buildings which house the hotel rooms resemble brightly colored townhouses with shuttered windows. The buildings have exterior corridors and the public walkways resemble long porches. Decorated with cherry wood furniture and regal tones of purple and gold, the rooms are stylish and visually appealing.

The Mint is the main building at Port Orleans French Quarter where you can find resort check in, arcade, gift shop, bus stop and the food court.

Sassagoula Floatworks and Food Factory is the food court at the French Quarter. It is one of the best food courts on Disney property, though not the largest. The French Quarter does not feature a sit down restaurant. Bonfamille’s Café closed when Port Orleans merged with Riverside resort.

The Port Orleans French Quarter has a really fun pool, the Doubloon Lagoon, which features a huge sea serpent. The long slide looks like you are sliding down the serpent's tongue.

Disney Port Orleans French Quarter is much smaller than the Riverside resort and is a great choice for those who want the intimacy of a small resort, with a range of amenities at a moderate price.